The Honda Civic Tour will now have three tours instead of one, with three different headliners for each one. You can see the press release and the dates below.

(Torrance, Calif., – June 11, 2014) — The 2014 Honda Civic Tour is taking a new turn in its 13th year – with not just one, but three successive tours and three distinct genres of music, as well as becoming a significant pillar of the new Honda Stage music platform. Alternative rock bands Grouplove and Portugal. The Man will co-headline the first 2014 Honda Civic Tour this summer with Tokyo Police Club and Typhoon supporting on various dates kicking off on August 10 in Seattle, WA. The second of the three tours will begin in the fall, with Brooklyn-based pop/rock band American Authors on October 1. Additionally, Latin DJ trio
3BallMTY will headline the final tour of the series starting mid-November.

“I would say that this is the dream tour. Honda is really invested in all art forms and connecting music with fans,” said Hannah Hooper of Grouplove.

Tickets for the Grouplove and Portugal. The Man Honda Civic Tour will go on sale starting June 20 and ticket information can be found at www.HondaCivicTour.com.

The Honda Civic Tour will uphold tradition as headlining bands will once again design their very own custom Honda Civic, which has always been a highlight of the Honda Civic Tour. Audiences are sure to be awed as headliners Grouplove and Portugal. The Man collaborate on an original design. Additionally, American Authors and 3BallMTY will each showcase their creative Civic designs later this year.

Under the Honda State program, American Honda brings together an unprecedented group of entertainment and technology leaders including Clear Channel (iHeartRadio), Live Nation, REVOLT, Vevo and YouTube to produce and distribute some of the best original, high-quality music content available today, through dozens of live events and exclusive online content. The success of the Honda Civic Tour makes it a natural fit as a pillar of the Honda Stage program.

“There is a new generation of music fans that can now share in Honda’s passion for music and fun-to-drive vehicles with the expansion of the Honda Civic Tour, reaching a wider and broader fan base,” said Nick Lee, Honda Brand Manager, American Honda Motor Co., Inc. “We are thrilled to work with so many talented artists, sponsor their tours and underwrite ticket prices so that fans have access to the music they love at an affordable price.” 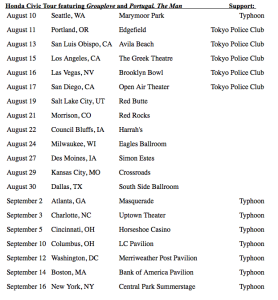