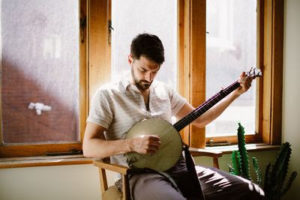 Tim Baker member of the Canadian band Hey Rosetta! has released his first solo track titled “All Hands,” which you can watch the music video for below. The song which is featured on Baker’s upcoming re-released LP Forever Overhead will be out on April 19th. When talking about the inspiration for “All Hands,” Baker notes “All Hands is a song about my past. “About growing up in the west end of St. John’s, and knowing I’ll get back there someday. The title is an expression we use all the time there to refer to ‘everyone’. And so for the video I wanted to see if I could show all of the people behind the song, behind the album, behind the “solo” Tim Baker – my everyone, so to speak.”