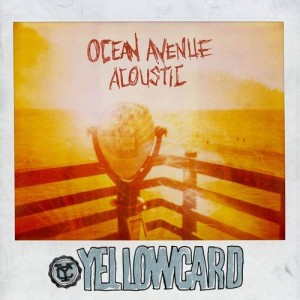 Yellowcard have always made consistently good albums, and Ocean Avenue Acoustic an acoustic version of their debut record Ocean Avenue is another successful effort. Released in 2004, Ocean Avenue introduced music fans to the genre of pop punk, a genre influenced by punk rock bands, with pop music filling in the gaps.  At the time of the record’s release, the members of Yellowcard from Jacksonville, Florida, were all young and inexperienced with the machine that is the music business. Their biggest ambition as a band before releasing Ocean Avenue was to play the Vans Warped Tour, a tour known for kick starting new bands careers in rock music. While the original Ocean Avenue was punchy and spoke to teenagers everywhere with its relatable songs and catchy hooks, this new acoustic effort sounds much more mature while also being more creative in the band’s reworking of the songs. The acoustic album features each original song, giving each tune a new life, while giving fans a new appreciation for the band as well as a case of hard hitting nostalgia for their teen years for those fans that are in their twenties.

The album’s breakout hit “Ocean Avenue” is slowed down quite a bit on Ocean Avenue Acoustic, and it showcases the one thing that the band is known for, which is the use of an electric violin, played by Sean Mackin. Making a violin a regular staple in the band’s music separated the band from their peers. It was Yellowcard who showed rock fans that a violin is not only used in classical music, but it can be used to add a different feel to mainstream music. Because of Yellowcard it was suddenly cool to be a violinist in a rock band. Songs like “Empty Apartment”, one of the album’s more bland songs, was slow to begin with, but the new version now only includes an acoustic guitar and violin, making the song’s lyrics about being alone really stand out. While the original version tends to drag, this acoustic version will please fans with the beautiful performance from Sean Mackin, who uses his classical music training to show the song in a new light that fans haven’t experienced with the song before.

“One Year, and Six Months” is another song that has been entirely redone. Replacing all of the instruments with just a piano, violin and vocals, vocalist Ryan Key shines on this track, with his voice sounding deeper and more self assured then on Ocean Avenue. While many of the songs on Acoustic sound very close to the originals, it is great to hear that Yellowcard didn’t just play each song as they are written, but that they took the time to change the songs to make fans feel that they are listening to something entirely new, instead of listening to recycled versions of older tunes.