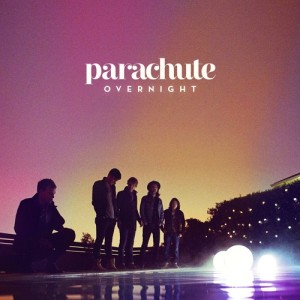 Ever since releasing their first single “She Is Love” from their debut album Losing Sleep in 2009, it seemed like Parachute was poised for success after the song became a hit for the group. It also brought girls to the band’s shows, which was the intention of lead singer and front man Will Anderson when composing the track. Since Losing Sleep’s release, Parachute’s sound hasn’t changed direction very much, except for bringing in more of a 1980’s and R&B influence. Their second album The Way It Was was a great pop album that showed that the band was slowly making their way around the block when it came to production and songwriting. Telling a story through their lyrics was the main focus on The Way..and the songs themselves were memorable. That album seemed like the next step forward in the band’s career, but Parachute’s latest album Overnight seems to be one step back.

While writing for the album front man Will wrote around fifty-five songs, committing himself to songwriting every day, a habit that is not unusual in Nashville where Anderson now lives. While he has claimed that he had more creative moments on this album than on the previous Parachute records, there are moments throughout the album, where in fact it does sound like the creative juices stopped flowing. “Meant To Be” the opening track, is a song that will gets fans in the groove of the album’s supposed direction, with its catchy chorus’s and great vocals from Anderson, it lets fans anticipate what is coming next. The next song “Can’t Help” is where the influence from the 80’s comes in with a keyboard part that sounds reminiscent of The Cure. After drummer Johnny Stubblefield kicks off the song, the synthesizer enters and begin the song’s main riff. Making use of his high vocal range, Will gives another great vocal performance, which will lead to the band to having another hit on their hands. After this, Overnight seems to slowly fall apart. While it is not abrupt, there seems to be an inkling that maybe Anderson wrote just a little too much, so much so that the material starts to become boring. Songs such as “Hurricane” is a slow jam that leaves a lot to be desired. Using a drum machine at different parts of the song, the song is slow to start, and does not offer much when it compares to the band’s past slow songs. The only highlight of the song is the piano part played by Kit French, the group’s pianist and saxophone player. The piano gives the song a relaxed feel, but barely gives it the oomph it needs to do well as a song.

Overnight’s closing song “Higher” tears the record apart at the seams, and is where it finally crumbles. The intro is a flood of sound, that sounds jumbled and is anything but musical. The song’s lyrics and orchestration is not representative of the musical ability Parachute are capable of. The song also stops very abruptly, which leaves anyone listening wanting more.

While Will Anderson and the rest of Parachute have certainly pushed their writing limits (as well as experimenting with their creativity) to the next level Overnight is not the group’s best effort, and due to its halting end, it may leave fans hanging.