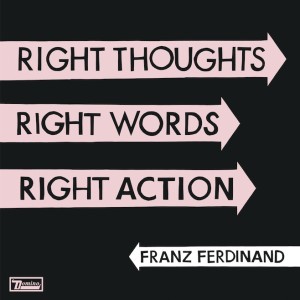 In 2002, Glasgow, Scotland indie band Franz Ferdinand burst onto the music scene with their hit single “Take Me Out” from their debut self-titled album Franz Ferdinand. With their disco infused rock tunes and a nod to historical figure Archduke Franz Ferdinand, whose assassination in Sarajevo was the start of the First World War, made the group seem different and appealing. But after 2009’s Tonight:Franz Ferdinand, the band decided to take a break, and after four years Franz Ferdinand is back with their fourth album Right Thoughts, Right Words, Right Action.

Overall, Right Thoughts…takes very much the same direction as their previous albums have, and with a four year break in between releases, you would think that Franz Ferdinand would come back with something new and exciting, but instead we hear pretty much the same style that was on the groups previous records. The only thing that is noticeably different on this new release is the bands the group has chosen to pay tribute to.

“Right Action”, the opening song is a disco infused track with a punchy likability but ultimately fails to impress anyone who is not already a fan of the band’s music. Tunes like “Evil Eye”, opens with a scream and a bold drum beat, but that is where the song becomes misleading. The rest of the song fails to meet the expectations of the intro. The best thing about “Evil Eye” is the vocals, sung by members Alex Kapronos on guitar, Nick McCarthy on rhythm guitar, and Paul Thompson on drums. While none of them bring anything new or innovative to the table vocally, all three of them make the song have an epic feeling that the band is going for on Right Thoughts… The Strokes influenced track “Love Illumination” is the album’s stand out song, and is the only song that has widespread appeal and has the makings of a strong single.

Songs like “Fresh Strawberries” has an obvious Beatles influence. Where Franz Ferdinand has taken sounds and characteristics such as the melodic guitar playing, from nearly every phase of The Beatles career to make something of their own, which ends up working in their favor. Not only does “Fresh Strawberries” show the depth of their musical tastes, but also where the band could venture to in the future, but judging from the songs on Right Thoughts, Right Words, Right Action, this path seems to be wishful thinking.