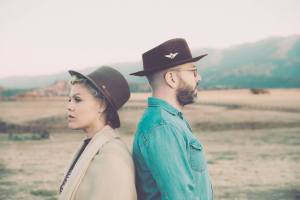 Pink and Dallas Green of City and Colour have released a new song under their new project You + Me called “Capsized.” The new duo’s collaboration album titled rose ave. will be released on October 14th. You can watch the lyric video for “Capsized” here. In case you missed it, you can listen to two other songs by the group called “Break The Cycle” and “You and Me” here and here.