AJR has announced a world tour for their upcoming album Neotheater, due out on April 26th. The tour is set to start on September 20th in Council Bluffs, Iowa at Harrah’s Stir Cove and end on December 14th at Manchester, England at Manchester Academy 2. Tickets go on sale March 22nd. You can check out all of the dates below. 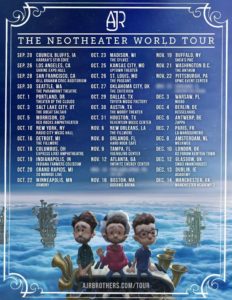