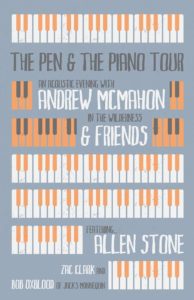 Andrew McMahon has announced The Pen and the Piano Tour, where he will be touring for six weeks with Allen Stone, Zac Clark, and Bob Oxblood formerly of Jack’s Mannequin. Telling fans in the announcement, that he is terrified to embark on this tour due to wanting it to be unique, McMahon envisions it to be somewhere between VH1 Storytellers and Mr. Roger’s Neighborhood. Pre-sale tickets go on sale tomorrow at 10 am local time. You can purchase them with the code PIANO. A general sale is happening on Friday at 10 am local time. All dates are below.