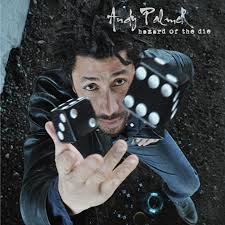 Colorado’s Andy Palmer set out to create a blues-rock inspired record and titled it Hazard of the Die, which has earned him comparisons to artists such as Nick Cave, Johnny Cash, and Tom Waits. On Hazard… the Tom Waits influence is most apparent with gritty vocals and a variety of sounds that create Palmer’s distinctive style. His songwriting pulls from his background as a law school student, a New York City public defender, and living a short time in solitude with a focus on mediation and spiritual searching.

The opening track “The Monk” is a true story about Palmer walking past a monk on two separate occasions, alluding to his deep sense of spirituality. This song has an Elvis Costello influence, taking flavors from Costello’s album When I Was Cruel—following it in its experimental nature.

“Broken Down in Bellevue” is a Tom Waits influenced track with raspy paper thin vocals that are used as a vehicle to express Palmer’s songwriting skills. On “The Defendant,” Palmer illustrates his gift of wordcraft, penning this song about a man being wrongly accused of a crime, who’s seeking justice.

Palmer’s guitar skills are strong in spite of taking a hiatus from music—pursuing those previously mentioned ventures—on two separate occasions before recording Hazard of the Die. Palmer’s music is convincing because of its depth. With instrumentation centering around his acoustic guitars, the beauty in his songs comes in large part from the compelling stories he tells.

Named as one of “Denver’s best” by Westword Magazine, it is not hard to understand why Palmer earned this title. With his honest songwriting and interesting subject matter, Andy Palmer is sure to be a hit in his home base of Denver and beyond.