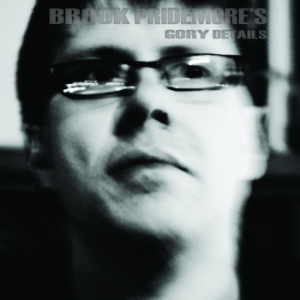 Gory Details, the latest release from New York based musician Brook Pridemore feels very authentic and real, as we get the feeling that we are right there with Brook as he is recording the album, something that cannot be said for a lot of records. Brook got his start playing house parties and working odd jobs as he struggled to make a living from music. He has since put out six albums, including his debut record Metal and Wood (2002), The Reflecting Skin (2006), and A Brighter Light in 2009. While we get an up close and personal feel on Gory Details, we also relate to Brook as he writes about his life experiences as well those of his friends, which makes for a highly enjoyable record. Gory Details opens with “Oh, E!” an acoustic track that sounds like it was recorded in a garage, giving it a rougher edge, and while Pridemore’s vocals sound very average, he and his band play well, writing catchy melodies and telling stories that we can identify with as their stories could be our own.

“I Am No Captain” begins with a drum beat that is reminiscent of the Weezer tune “Keep Fishin’”; however that is where the similarities end. While the record has used an acoustic guitar as its main instrument, on this tune Brook plays an electric guitar, and while this points them in a different direction than previous tracks, the riff’s loop-like sound makes the song a chore to listen to. One of Gory Details last tracks is “Comfort Brother” an interesting song that uses a harmonica in the intro, something that has been absent from the record up until now. Having more of a country vibe to it, we see another layer to Brook Pridemore and his music, and right before we label him as a one-dimensional musician, this tune saves him from being labeled as such.

Overall, Gory Details is a strong album that will be enjoyed by indie music fans and anyone looking for something different to add to their music collection. Gory Details comes out today. If you want to purchase the album, head over to Brook Pridemore’s Bandcamp page.