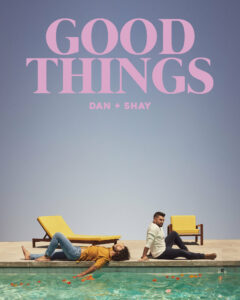 Coming onto the country scene in 2014 with their debut album Where It All Began, Nashville country duo Dan and Shay have released their latest body of work titled Good Things. While the duo has steadily rose to fame over the last seven years, with the singles “Tequila” and “From the Ground Up,” the duo began their steady rise to explosion in 2020 with the single “10,000 Hours,” featuring an appearance by Canadian singer Justin Bieber. The band is known for its pop focused tracks with a country influence and the selections on Good Things reflects this. Opening with the title track, “Good Things” is a sing along anthem that fans are clearly adoring, if the band’s recent Iowa show was any indication. Singing along to almost the entire song, the crowd ate up every second of the tune, as Dan and Shay stare back in awe.

“Give In to You” is another piano driven number led by Shay Mooney, as he speaks of always giving into a woman, and his powerful voice comes into full effect here, while giving fans another song to relate to. “One Direction” is up next, and its acoustic guitar heard throughout the song becomes addicting and a recurrence throughout the record. “Glad You Exist” and “10,000 Hours” are two standout tunes from the album that have shot up the charts in the past year. Both tunes feature a catchiness that becomes lodged in your brain, with a chorus that remains impossible to forget.

Ending with “I Should Probably Go to Bed,” this particular cut was not a single that was as memorable as those in the band’s past, though Mooney certainly displays a lead singer attitude as his booms from start to finish. While Good Things will not go down as one of the best albums of the year, it is a nice breather from the pandemic stress, allowing anyone listening to get lost in the music that is written to take us away.