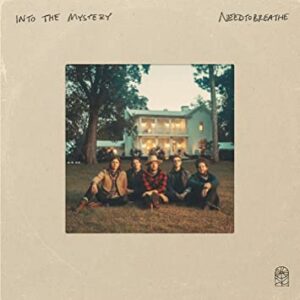 Forming in the early 2000’s, Seneca, South Carolina rock band Needtobreathe has released their eighth studio album Into the Mystery, the follow up to 2020’s Out of Body. After the tour for Out of Body was cancelled due to the ongoing COVID-19 pandemic, the band decided to do something they had never done before – rent out a house in Tennessee for three weeks and write songs for a new album, which would turn into Into the Mystery.

Opening with the acoustic track “What I’m Here For,” the now trio reminds fans and newcomers that they are one of the best rock bands that you have probably never heard of. Starting out as a Christian rock band, the trio had decided that the label was limiting, and while they have gone towards the secular music industry, you still here tinges of the band’s Christian faith underneath their undeniably good Southern rock, reminding their audience of older groups such as Creedence Clearwater Revival. Following “What I’m Here For,” is the album’s title track, and one of the band’s best songs to date, as front man Bear Rinehart takes front and center vocally bringing the rest of the group with him. As the band crafts a fairly simply track about their faith, without making it too obvious, it is a song anyone can enjoy regardless of their spiritual beliefs.

“Carry Me,” is up next and features an appearance from Switchfoot lead singer Jon Foreman, who the band will be touring with later this year. Sticking to the band’s southern rock sound, the sound is also simple, with a sound and vibe you will get lost in, as sonically the band brings a certain calmness to their music, that many other acts today do not. Feeling like you are watching Needtobreathe perform in front of you, they have created an intimacy with their recordings and music that is a rare find.

“Don’t Throw All Good Things Away,” is Into the Mystery’s ninth track and features the album’s second collaboration with Natalie Hemby, a singer-songwriter who has written tracks for artists such as Lee Ann Womack, Toby Keith, Miranda Lambert, and Little Big Town. Introducing strings into the band’s sound is a terrific addition to the tune’s flavorful acoustic style, with the female backing vocals adding a polished feel.

Closing out Into the Mystery is “West Texas Wind,” a piano driven ballad that closes out an album that has plenty of heart and goodness. While it was written in quarantine and solitude, after listening to the album in full, this latest body of work from Needtobreathe is meant to be shared with everyone, as anyone who listens will find some facet of the record worth listening to. In a time still full of uncertainty, Needtobreathe is the band we did not know we needed.

Watch the music video for “Into The Mystery” below.