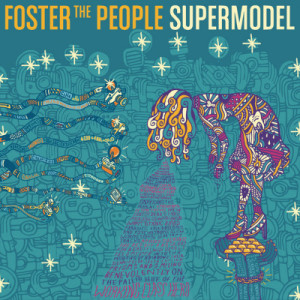 Supermodel is the second album from Foster The People, a Los Angeles power pop band. While their 2011 hit “Pumped Up Kicks” lit up the charts, the band has failed to have another song that measures up to its success. The band’s first album Torches (2011) was well received but Supermodel feels very much the same as their previous effort, but with a little bit more funk and disco, while including some acoustic tracks. Formed in Los Angeles in 2011 by 25 year old Mark Foster, Foster was a jingle writer with a past drug addiction after he indulged in the party scene in West Hollywood. He met drummer Mark Pontius in 2008, who was impressed with the number of songs Mark had written saying, “”Some were on the guitar, and some were on the computer. But it was this really awesome singer-songwriter thing with a tricked-out beat, and I felt we could go wherever we wanted with this.”

While their first album was well received by critics, Supermodel has received mixed reviews since it offers more of the same sound fans heard on Torches, which is bad if the band wants to stay around for longer than three years. The opening track “Are You Where You Want To Be?” starts off the album on a high note as we get an African music influence throughout. Foster’s voice is clear and crisp, and for anyone who wasn’t a fan of the bands more washed out sounding material, there is a good chance that they will be converted to Foster The People’s sound, at least somewhat. The song overall is a catchy one, as its scattering drum beat gives the tune a punch that we don’t see often in the band’s music. It also may draw comparisons to Bombay Bicycle Club’s latest album So Long, See You Tomorrow with its worldly influence. “Nevermind” sounds a bit like you are listening to the song underwater as every instrument on the song seems to wash the others out, making for one big clumsy mess.

The disco infused track “Best Friend” is by far the strongest tune on the record, as we get a song with a bass line that locks in the beat, while also adding in some glittering horns that really fit well in the song. For an album where the majority of the songs sound sloppy and rushed, “Best Friend” is the album’s only true gem, and would do really well as a single. Lastly, we get “Goats in Trees” an oddly titled song that is entirely acoustic. While the song has a repetitive strumming pattern on the guitar, its strongest component is Mark’s voice. Adopting a more raspy tone, we see that Mark can actually sing really well, and writing the kind of music that Foster The People writes doesn’t do Foster any favors vocally. While it would be nice to see Foster The People go in a different direction with their songs, there is a likely possibility that they will stick with the same sound, and the band will be on their way out.

2 comments to “Foster The People: Supermodel”