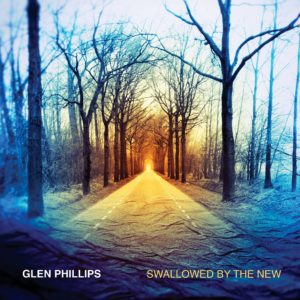 After starting his band Toad The Wet Sprocket at the age of 15, guitarist Glen Phillips would have a successful career with the band, before they disbanded the group in 1998, due to creative differences. While the band members have gone on to work together since then, it is their front man that has been an active force within the music industry. Releasing his first effort in over a decade with his new full length Swallowed By the New, we see a heavier side to Phillips, combined with slower, Elvis Costello like tunes that are deeply satisfying.

Opening with “Go,” we hear Phillips quietly strum an acoustic guitar, reminiscent of his early days as a solo artist when it was just him and a guitar up on stage. Kicking off the record with lyrics that sound fresh and bold, New already gives off inklings of being an excellent record from a singer-songwriter.

“Baptistina,” the LP’s second song, brings in a country influence with a light chorus that slowly makes its way into your head and with its catchy chorus, it will become a favorite of fans right away. Trying out different sounds, Phillips includes a track called “Leaving Oldtown” on Swallowed, and its string arrangement which is the song’s most prominent feature, gives it a beautiful feeling, as Phillips performs acoustic guitar over the strings.

While you would not call Phillips’ latest effort rock and roll, tracks such as “Amnesty” are perhaps the closest he gets to performing the genre. With a gentle palm mute on the guitar that kicks off the tune, the song moves steadily along and is the snappiest selection we hear so far on Swallowed By The New.

Closing track “Reconstructing The Diary,” is the records shortest tune and its breezy style is the perfect closer for Phillips as he ends his exploration of new ground as a solo artist. While Toad The Wet Sprocket has made a return, after listening to Glen Phillips latest collection of solo work, he feels quite confident straying out once again on his own, leaving him sounding like he is content with his achievements.