Harry Styles has announced tour dates in support of his upcoming album Fine Line, due out on Dec 13th. The tour is set to begin on June 26th in Philadelphia at Wells Fargo Center and ending on October 3rd in Mexico City, Mexico at Foro Sol. Jenny Lewis and Koffee will be opening on this leg. The European dates are set to begin on April 15th in Birminham, UK at Arena Birminham and ending on June 3rd in Moscow, Russia at Megasport Sport Palace. King Princess will be opening. Styles will be announcing dates for South America, Australia, and Asia soon. For the North American dates Verified Fan and American Express cardholder presales will begin on November 18th and a public on sale will begin on November 22nd. Europe on sales will begin on November 22nd as well. 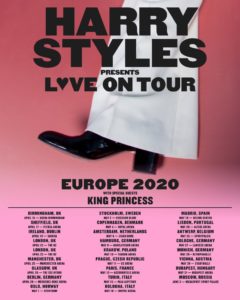