The Jonas Brothers have added a European leg to their upcoming tour to promote their upcoming album Happiness Begins, due out on June 7th. Beginning on January 29th in Birmingham, England at Arena Birmingham, the tour will take the brothers across Europe with stops in Ireland, Germany, and Spain, before ending on February 22nd in Paris, France at Accorhotels Arena. The band last released music in 2009 with the LP Lines, Vines, and Trying Times. The band announced their return in 2012 with a show at Radio City Music Hall in New York City and an album that would be titled V. Amid increasing tension in the band, they announced a hiatus in 2013, without releasing new music. All dates are below. 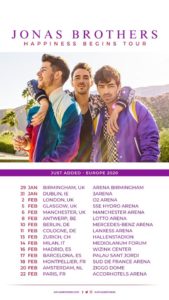