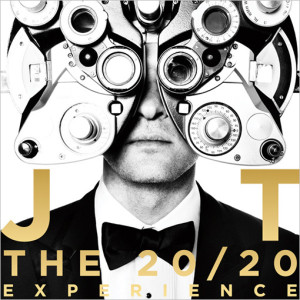 Justin Timberlake is back with an experimental pop album bursting at the seams with different sounds that will no doubt please long time fans, while introducing new fans to Justin’s music. In many ways, what comes out of 20/20 Experience is either great or too experimental when it comes to radio friendly pop. The opening number, called Pusher Lover Girls, starts out with an old movie intro, and then leads into what is an overproduced pop song that is underwhelming for an opening track. The outro is about two minutes too long, and feels like it’s taking up space on an already long album, which clocks in at one hour and ten minutes.

Suit and Tie, the lead single off the album takes a minute to pick up, but once it does it takes off and soars. The song shows off Justin’s falsetto voice, and will make listeners become enthusiastic for the tune full of catchy beats, and a roll down the windows feel. The song invites listeners to crank the stereo at full volume, hoping to grab the attention of other drivers sitting at the stoplight, so that they too can become giddy about Timberlake’s new music.

Hold The Wall is another step into sounds not heard in Timberlake’s previous songs. Bringing in rain sticks and various tribal drums, it seems at times that there are so many sounds that one’s sensory overload may explode by the end of the song. While sales for the album seem to be promising given Timberlake’s stellar track record, this album is not for everyone. However, whether you are a diehard fan of Timberlake or a newcomer to his music there is a little something for everyone on this album. 20/20 Experience will be released on March 19th.