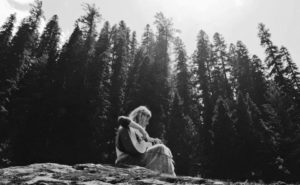 British singer-songwriter Katherine Abbott has dropped her haunting new acoustic song “Lullaby For Lucas,” which you can stream below. Growing up in a musical household, Abbott began busking at the age of 16 and has since gone on to perform at festivals all across England including Glastonbury, Rollright Fayre, and Secret Garden Party. Inspired to write “Lullaby…” after meeting a man named Lucas during her travels, Abbott says “Lucas was an opera singer in Vienna but had lost his voice and had taken to living a nomadic existence. We had a jam in a bar one night and he tried to sing but his voice just came out as this croak which brought him to tears.”

Abbott will be touring in 2021 and releasing more new music.