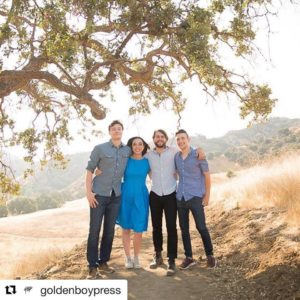 Starting out their professional lives as the backing musicians in front man Nate Weiner’s backing band for his solo album Ride the Sun, LA bluegrass band LA River Bend morphed into something completely different as they toured up and down the West Coast of the United States. Releasing their new album Run these Hills in December of last year, the group has written an LP that is different from the normal sunny personality many acts from Southern California are known to have. While the group brings something new and different to the California music scene, the four-piece bluegrass and pop act, performs music more fitting for Deep South, giving an interesting twist to their sound.

Opening with the acoustic and bouncy “Summer Wind,” LA River Bend starts off their latest EP well, with a song that works as an opener, as we get a taste of the bands chops straight out of the gate. Complete with foot stomps and stunning three-part harmonies, one of the region’s only folk groups demonstrates their talent beautifully. The EP’s third track “High off Of You” introduces a pop influenced song that makes listeners turn heads at the songs original, tasteful, and inviting demeanor. As Weiner takes over the vocals over for most of the track, fans will get a taste of what he might have sounded like if he had struck out on his own. With vocal parts from members Emily Elkin on cello, Branden Stroup on bass, and Jacob Seldes on drums, the track comes full circle rounded out by a skilled group of musicians, sounding determined to make it big.

Closing with “Don’t Get Lost,” the band puts a peaceful track on the EP to finish it off. While some songs often feel like they are only being tacked on the end as if the artist didn’t know where to put it, “Don’t Get Lost,” sounds it could be a bridge from one album to the next, and if the group were to write a full-length LP, we hope that they include “Lost” on its track listing.

A rarity in Southern California and a breath of fresh air for the rest of us, LA River Band is a band to catch as Run the Hills not only illustrates their skills, but also their longevity.

Listen to “Summer Wind” below.