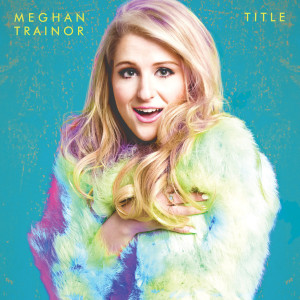 When Meghan Trainor burst on to the music scene last year with her catchy single “All About That Bass” music fans heard a tune that discussed female empowerment and being proud of who you are, with the track also being a throwback to doo-wop with sprinklings of pop. With her new album Title, Trainor continues the empowerment discussion along with songs that are heavy on the old time influences. While she can certainly sing, its these two aspects of the record that make Title feel a bit repetitive, though it packs in enough fun to be able to it listen all the way through while still getting enjoyment out of it.

While Trainor is a newcomer to the music business, she has been pursuing music for the last five years. In 2009 at the age of fifteen, she enrolled at the Berklee College of Music in a five week course, while eventually making her way to the college’s songwriting competition. Feeling that she could never be an artist due to her larger size, she gravitated towards songwriting and would eventually land a publishing deal after the release of three self-released albums (Meghan Trainor, I’ll Sing With You and Only 17) that led her to relocate from her hometown of Nantucket, Massachusetts to Nashville, Tennessee.

Title opens with “The Best Part (Interlude)” that quickly demonstrates the direction of the entire album and shows that Trainor has actual vocal ability, unlike her smash hit “All About That Bass”, which is so heavy on the autotune, it’s hard to tell whether or not she can actually sing, though thankfully, the rest of the record makes up for this flaw. While the track is certainly catchy, by the time we hear it on Meghan’s debut, it feels worn out and past its prime due to being overplayed.

At different points throughout Title, Meghan teams up with different musicians for a duet, and on “Like I’m Gonna Lose You” she sings with John Legend, and it is one of the best tracks on the record. As both Legend and Trainor sing together, we are convinced that if Meghan put some variety into her music, she could potentially stick around for awhile. Next, we have the album’s title track, and while Meghan has largely stuck with doo-wop, “Title” is the song that digs deep into pop, while the horns give the tune some style.

“Lips Are Movin’” was the next single to hit the radio, and on the track, Trainor attempts to rap with lukewarm results, along with the same vocal style heard on many of her previous songs, which makes the album blur together, leading the release to sound very bubblegum and unoriginal. Title’s closing number is called “Credit” and it’s the same lazy easygoing pop song in the same vein as the rest of Title.

Throughout its duration of the record, we come to the conclusion that Meghan Trainor is a talented vocalist, though the record has a few weak points. We also know that if she really wanted to, she could experiment with her music and try and write something that pushes the boundaries of what her audience thinks she is capable of. While Trainer is only twenty-one, she won’t be young forever, and if she doesn’t continue to evolve, other musicians may leave her in the dust.