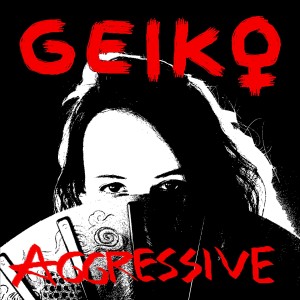 Amaris Wenzel, who goes by the stage name Geiko, is an EDM, (electronic dance music) artist from Switzerland, who released her new album Aggressive in July. And right from the start we are treated to an entertaining ride that takes us through a maze of EDM, goth, and synthpop music that is incredibly entertaining. While it certainly has its moments of greatness, there are certain elements on Aggressive that tend to bring the album down, and we hear things that could be improved on Geiko’s next album. Songs such as the records title track, begins with strings that are the centerpiece of the song, which are accompanied by a scattered drum beat and bouncy synths. The element of the tune that is most surprising is the deepness of her voice and the 1980’s influence we hear in it. While Geiko’s vocals sound very computerized at times, it still gives listeners the feeling that she is singing naturally, even though the genre that she plays allows for a lot of manipulation in the music.

Tracks such as “Catch Me” have a very robotic sound with the drum machine sounding very uneven at times, with the “tic toc” sound adding an interesting detail to the track that you would not expect, as each song on Aggressive uses largely the same sounds throughout the album. The track sounds perfect for a dance club, as we can imagine the strobe lights going into full effect when this song comes through the speakers. The only thing that takes away from the songs unique feel is that it has a very busy sound, as one “instrument” bounces off of another creating a din of noise, which is fine if you are already a dance music enthusiast, but if you aren’t, you won’t be able to appreciate it fully.

“Blade Ride” opens with an almost meditative quality, and it starts out as one of the calmer tracks on the record, though it has its moments of grinding emphasis. Geiko’s smooth vocals on this track allow the track to have subtle beauty, though the rough synth sound tends to cover up this great aspect of the tune. While Geiko certainly makes her music entertaining and worthwhile, she may want to tone down some of the electronic aspects of her music, so her voice can really come through, but outside of its flaws, Aggressive is a record that must be included in any dance music collection.