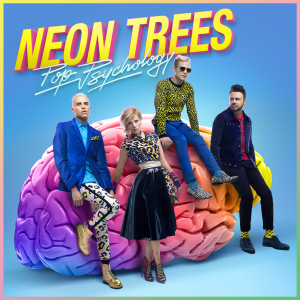 Utah pop band Neon Trees make good pop music, the kind that makes your head bob and your body sway in time to the tight beat that drummer Elaine Bradley plays throughout their new record Pop Psychology. As catchy as it is, by the end of it you wonder how long the band can sustain their bubbly style of music and if it will ever stay relevant. Pop Psychology does not include any risks on the music front, but lyrically it sounds like front man Tyler Glenn wanted to take some risks, by putting his skeletons out in the open. Glenn talks openly on Pop Psychology about coming out as gay, something that is painful and nerve wracking for anyone considering it, but especially for those who come from a conservative environment such as Utah. The band rose to fame quickly after opening for The Killers on several North American tour dates. They soon signed to Mercury Records and released their first record Habits in 2010. In 2012, they released their sophomore album Picture Show.

The albums first track “Love In The 21’st Century” about a girl who fails to call or text after you go out on a few dates, is most likely an autobiographical song about Glenn keeping his sexuality bottled up inside. Glenn says that “this is probably love in the 21’st century” when describing this generation’s lack of in person communication. While Glenn is right about today’s technology, the song doesn’t have a lot of depth to it, despite its catchiness. Glenn’s vocal delivery comes across as very charismatic and self-assured, and the rest of the band is right on the same page as their front man. Everyone knows exactly the direction they are going on this record, and everyone is so content with it that no one is willing to change things even slightly.
One of the records first singles, “I Love You (But I Hate Your Friends)”, is a catchy number with the opening bars featuring Elaine playing a dance like beat with bassist Branden Campbell playing a bass line that perfectly matches Elaine’s drumming, with a funkiness that we haven’t heard yet in previous Pop Psychology songs. Aside from these highlights, “I Love You…” feels repetitive, and sounds like a recycled version of “Love In The 21’st Century”, and while the band tries to sound inspired throughout the album, “I Love You…” doesn’t convey that.

The band finally gets a spring in their step in the album’s 10th track “Living in Another World” as it opens with a colorful guitar line from Chris Allen. Throughout the song, we feel like the band is giving it their all with confident sing along “oh oh ohhh’s” from Glenn. “Living in Another World” is the records strongest track and will win over anybody who is not a fan of Neon Trees. While Pop Psychology offers nothing new for pop music, it is a catchy record that you can’t get out of your head in the present, but as for being something that you will listen to years from now, it falters.