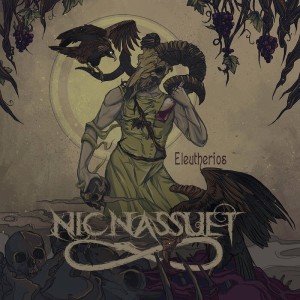 Los Angeles folk-goth guitarist Nic Nassuet has had a long history of performing on stage and his new album is Eleutherios the next chapter in expanding his musical horizons to tackle the art of performing. Getting his start in musicals such as Sweeney Todd: The Demon Barber Of Fleet Street was one of the first experiences Nic had onstage on stage and from the opening notes of his new record, we get an idea of what his theater background was like, as his voice fits in perfectly with the Broadway style. After finishing up his theatre run, he began looking for something more dark and mysterious, and as a result he began performing in various metal and punk bands until he began his latest goth-acoustic project.

The first track “Cross and Crown” is a classical goth track that features strings and an acoustic guitar that introduces us to the direction to the album. With his booming voice, Nic takes listeners on a journey where a woman waits for a man to lift her out of a dark depression, which fails. With beautiful strings and background vocals, Nic has written an emotional opening song that lets listeners know that Nassuet’s sound is unconventional and rarely heard.

“The Nothing” is a soothing acoustic track that lets the music tell the story of someone who wants to simply fade away. While Nic’s music proves to more depressing than we first anticipated, the music is what moves us to keep listening, despite the somber stories being told. While the music is well composed and each track tells a tale that is compelling, the music feels like its trying to reach mostly classical music fans, as well as those who enjoy more genre bending musicians.

“She Rides Moonlight” ends the record on the same note as its opening number, and while it engulfs the audience, it doesn’t feel like a connection can be made with everyone listening, due to the music’s unique sound.

Despite this, Nic Nassuet has done an excellent job at crafting a record that feels pure and emotional, while letting the audience really feel the music and hearing music that borders on magical.

You can take a listen to “She Rides Moonlight” here.