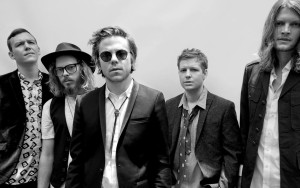 Portugal. The Man and Cage The Elephant have announced a tour together. You can see the dates before.