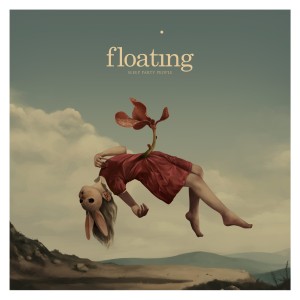 Floating, the new album from Danish shoegaze and dream pop band Sleep Party People is unlike any record that you will hear this year. Sleep People Party began in 2008 in Denmark and is fronted by musician Brian Batz, and while the band is credited as having other members besides Batz, he insists the project is his and his alone. On stage, Brian who also plays guitar, and his friends who double as his temporary band mates, wear bunny masks to make sure the band hides any emotions they have so that the music can speak for itself. While Batz’s last album We Were Drifting On A Sad Song, released in 2012, dabbled in more alternative rock, Floating leads listeners into a dreamy state as the album focuses more on dream pop and shoegaze music, sub genres of alternative rock that focus on breathy vocals, and use of guitar effects such as distortion to create a wall of sound. Each song on Floating has its own unique sound, while still sounding largely similar to each other.

The opening track “Changing Time” begins as an instrumental track, with Brian’s high vocal range taking over. The tracks wispy guitar lines and muffled drum beat gives the song a dreamlike quality, providing the perfect soundtrack as you nod off to sleep and start to dream, which is the kind of music that Sleep People Party do best. Sounding a bit like Bon Iver, the music isn’t something that is good to listen at any time, but if you are looking for music that is more subtle in sound while still wrapping you up in its complex textures, than Floating couldn’t be a better album.

“In Another World” brings a slightly more rocky tone to the already drowsy album. The song isn’t one of the albums best tracks, mostly due to the fact that it does not have the same calming effect that “Changing Time” does. Some might say it has a jarring sound, due to all of the edgy sound effects, the dead sounding drums, and Brian’s high vocal range.“I See The Sun, Harold” is an atmospheric song that has a calming, almost meditative effect. The songs psychedelic tendencies suit the band incredibly well, and after listening to the track, Sleep Party People should completely ditch the rock edge they tried to include and stick to the dreamy and soothing music they play, despite their attempts at trying to be creative with the rock inspired sound.

The last track on Floating is “Scattered Glass”, a slow tune that has Brian sounding very feminine, as his voice goes even higher on the track, while once again capturing all of the elements that make Sleep People Party a decent musical endeavor. While the project may not be for everyone, after a few listens it is obvious that Brian puts a lot of thought and effort into honing his creative visions, and making his music the best that it can be. What is even more impressive is that he does it mostly by himself. While Sleep Party People will never grow to be a huge band, among the music fans who like more indie music, the band still has lots of room to grow.