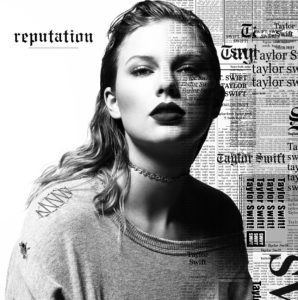 Ever since releasing her 2013 album Red, Taylor Swift has consistently pushed herself with everything she releases. Moving towards pop rather than continuing with her country roots, the country darling has released her record reputation, diving head first into electronic music, a first for the Nashville vocalist. Consistently breaking chart records with every LP, she always seems to not only know what will work stylistcally, but also what works with her voice, and on reputation everything flows except for a few tracks.

Opening with “…Ready For It?,” the track is not the album’s lead single, but its second, and while it’s a new sound that fans will have to get used to, it’s hard and grinding sound becomes oddly catching once the casual Swift fan eases into it, though for her devoted Swifties, they are guaranteed to like it, as every Swift LP garners plenty of support from diehard fans.

reputation’s lead single “Look What You Made Me Do,” is easily the weakest track on the LP and perhaps it wins the award for worst song of the year. Declaring the old Taylor dead towards the end of the song, we can’t help but feel that reputation is heading in the wrong direction. Killing off her old music video alias’ in the video for the track, Swift is constantly redefining herself, while keeping the cash flowing and her fans devoted. While her music may not move everyone, at least you can say she keeps things interesting.

Still digging into the 80’s synth influences half through reputation, Swift presents fans with “Gorgeous,” a track that feels danceable and very Taylor – at least when we are talking about her newfound style. Tying together the relatable formulaic style that made people fall in love with her music, “Gorgeous” has a subtle catchiness that won’t escape her fans or anyone else listening.

Closing with “New Years Day,” this is the song that got some promotion before the album was released, performing it on The Tonight Show Starring Jimmy Fallon and in a private fan concert that was taped for all to see. Performing the track among 100 fans at one of her many homes, the lights were turned low with fans intently listening. While “New Years Day” is not one of the best Swift ballads, for reputation it holds an intimacy that none of the other songs have. With overdubbed vocals and a soft piano, it’s a welcome change from the more manufactured songs Swift is now writing.

While it is now impossible to predict where Swift will go next with her music, reputation is worth the listen if you are into hearing something different, though if you are longing for her country roots, that era of her career has been entirely erased.

Listen to “Gorgeous” below.