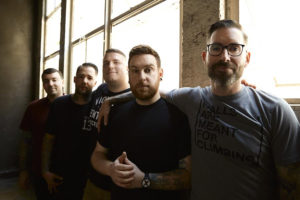 Hardcore band The Ghost Inside has debuted the lyric video for their new single “Pressure Point,” which you can watch below. Forming in El Segundo, California the group released their first album Fury and the Fallen Ones in 2008 and most recently Dear Youth in 2014. “Pressure Point” will be appear on the band’s upcoming self-titled album, due out June 5th on Epitaph Records.