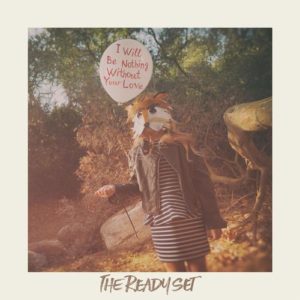 On his new record I Will Be Nothing Without Your Love, vocalist Jordan Witzigreuter also known as The Ready Set, has released a set of catchy and predictable collection of songs on his new album released by Hopeless Records. Coming up with the idea for the band in his hometown of Fort Wayne, Indiana, Witzigreuter is the sole member of the group and plays with a backing band for live performances.

Beginning with “Disappearing Act,” the LP’s lead single is a catchy number that shows The Ready Set in a bouncy and bubbly light, the kind of sound found in newer pop punk bands of the last few years. There is nothing too edgy on this release, but to the radio slickness is there, and there is no doubt that fans will eat this record up. “I Will Be Nothing Without Your Love,” the album’s title track is a finger snapping tune that showcases Jordan’s tuneful voice with a hint of auto tune that gives off a clean production.

“No Love” changes direction slightly by exploring a reggae influenced style with an appearance by Jule Vera singer Ansley Newman. While this direction paints the album in a different light, the record still plays it safe, containing itself in a box that feels compressed, and we wonder why The Ready Set didn’t try and experiment with different genres, tones, and sounds, outside of “No Love.”

“See You” is the final cut on I Will Be Nothing Without Your Love, and for all of the album’s simplicity, “See You” is a beautiful song that really strips down The Ready Set to his rawest form with just his voice and a piano. With this type of sound, we wonder just how The Ready Set would sound if he would release more of this quiet and reserved material, because it’s the best song he’s released to date.

While I Will…is good for its predictability, we question how much it would stick in people’s minds and once they forget about it, would they remember it again, as fans know exactly what they are going to hear when listening. Only The Ready Set’s fan base will be able to answer that question and we hope for the sake of Witzigreuter, its positive, as he has the chops to stick around for a while, even if it means changing up his musical choices.