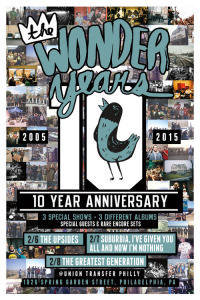 The Wonder Years will be celebrating their 10 years as a band by playing all of their albums from front to back each night from February 6th-8th at Union Transfer in Philadelphia, Pennsylvania. More information about the shows can be found below.

We’re celebrating our 10 Year Anniversary of being a band on Feb 6th, 7th & 8th at Union Transfer in Philadelphia, PA.

3 Special shows – 3 Different albums plus some other favorites & rarities.

Feb 6th – The Upsides
Feb 7th – Suburbia, I’ve Given You All & Now I’m Nothing
Feb 8th – The Greatest Generation

Tickets go on sale this Friday, November 14th at 10 AM EST.

Damn. Ten years…for a band that was never planning to play a show, there are a lot of things to write here.

Things that can be said, things that should be said – Is thank you enough? Words are never really going to put it into perspective because The Wonder Years as you know it was never a thing that was supposed to happen. We were going to hang out for a day, maybe write a song or two for fun and then move on with our post-high-school lives. We had other bands. We were going to college. We had plans, but plans change. I remember after our first weekend tour, Kennedy saying something like “What if this band gets signed and starts touring full time?” We all laughed at him.

A few weeks ago, we got to stand in front of a crowd of 9,000 in Philadelphia and play songs we had written in basements and garages and places that were literally shut down for health code violations. It almost felt like we were crashing a party; like we didn’t belong where we were. It’s a feeling we’ve had a lot. We’re playing with people who are, for all intents and purposes; rock stars. I don’t mean that with any of the negative connotation it carries; I just don’t know what else you’d call Blink-182 or Metallica. These guys are rock stars and we’re the same idiots we’ve always been. We still feel closer to VFW Halls than we do arenas. I think we always will.

We’ve played 25 countries and 45 states. We had a record debut in the top 20 on Billboard’s Top 200 (albeit number 20. It still counts!), but some of our favorite memories are always going to be sleeping on strangers’ floors or lying about flat tires so that we could come to shows late after swimming in the ocean right off the highway.

So, we made it through ten unlikely years as a band and, god dammit, we’re going to celebrate.

We booked three back-to-back-to-back nights at Union Transfer in Philadelphia. The first night, we’ll play “The Upsides”, straight through. The second night, “Suburbia”. and the third, “The Greatest Generation”. Every night will also feature an encore (whether you want it or not) set of old songs and rarities. Chances are, we’ll play songs that we won’t ever play again, unless we make it to twenty years or something like that.

There will be three day passes if you want to attend all three nights or single day tickets if that’s more your vibe. We’re working on locking in some awesome other bands to celebrate with us and we’ve gotten discounted block rates for hotels for people that want to come from far away for the whole weekend (as mentioned above). We’re also planning to reprint some of our earliest merch designs and have other throwback-centric surprises planned for everyone.