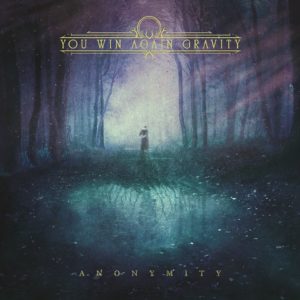 After releasing their 2016 EP What’s Left of The Distance, Windsor, England metal band You Win Again Gravity are back with their mini album Anonymity. Opening with “Phonetics” the group waste no time blowing their audience out of the water with their intricate music that weaves together pop and metal, which is pleasing to the ears without sounding to polished. Vocalist Jack Jennings provides the record with its heart and soul as his raspy vocals makes the music enjoyable and riveting.

On “Phonetics” it’s clear the band plays metal music because they love it and with influences such as A Lot Like Birds and The Deftones, the group’s bleeding sound is unforgettable. Anonymity’s latest single “Grace & Focus” brings the group’s technical skills to the forefront as they experiment with different sounds, riffs, and tones to create a track that jumps out at listeners, while writing parts that resonate emotionally with their audience.

Tunes such as “A Lack of Clarity” bring a slowness to the record that demonstrates their skills, while changing up the tone and pace, allowing the band not to pigeonholed by their chosen genre. Being led by James McKenzie on drums, his precise approach to drumming shows off his mad chops while keeping everyone together, as the entire group bulldozes through the song with infectious energy.

Ending with Anonymity’s title track, the LP’s longest song by nearly eight minutes, You Win Again Gravity have released a passionate and colorful record with plenty of bright moments, highlighting their passion perfectly, as well as getting their name out there successfully with a record that will sell itself.

Listen to “Grace & Focus” below.