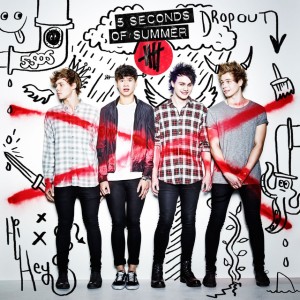 5 Seconds of Summer have exploded onto the music scene with their debut self titled album that comes hot off the heels of being discovered by Louis Tomlinson of One Direction and a string of successful EP’s. The band got its start in 2011, when Luke Hemmings (guitar and vocals), Michael Clifford (guitar and vocals), and Calum Hood (bass and vocals) met in school. Once the three band mates needed a drummer, Ashton Irwin was invited to join the band. The group has released four EP’s including Unplugged (2012), Somewhere New (2012), She Looks So Perfect (2014), and Don’t Stop (2014.) While the band found success in their home country of Australia, the band did not find international success until 2012, when Tomlinson saw the groups Youtube cover of the Wheatus song “Teenage Dirtbag” and contacted the band about opening for One Direction on the Australian leg of their Take Me Home tour. Afterwards, the band started to gain international exposure, and it wasn’t until the release of the She Looks So Perfect EP that the band became labeled as the next One Direction due to their quick rise to fame. The band has released their new self titled album too much success, and after listening to the new record, 5 Seconds of Summer have perfected the pop punk genre and made it relevant once again, after its decline in popularity in the mid 2000’s. While 5 Seconds of Summer don’t have much punk rock in sound, their rock and pop stylings give the group a much needed edge which they need to separate themselves from the pop music of One Direction.

“She Looks So Perfect” opens the record with sing along worthy “hey, hey, hey’s” and right from the start we know that 5 Seconds of Summer are capable of writing irresistibly catchy choruses that we won’t be forgetting soon. While the group might have been discovered by one of the biggest bands in recent years, the groups sound brings back memories of the pop punk music of the 2000’s, when we heard many bright, fast, and happy sounding pop tunes with hints of punk sprinkled throughout. 5 Seconds of Summer feels very authentic, and while they sound like they could have come on the scene a decade ago, they sound very comfortable with the music they are making, as they are writing songs that really represent themselves as musicians and where they are currently.  Many characteristics of pop punk such as the high pitched vocals, are absent from the band’s sound, and the songs don’t sound have many similarities between them. Ultimately, the band has cemented themselves as a pop punk act, and while their style may change as the band progresses with age and experience, due to most of the members still being in their teens, if this album is any indication, they will never stop writing songs that become stuck in our heads. “Beside You” is an older tune that the band reworked into a new version. While the bands older EPs show a young band that is just getting started, the new versions of old favorites (including “Try Hard” on the Don’t Stop EP) demonstrate that the band has gained confidence in their songwriting and album production. Fans that have been there from the start will love the new version of “Beside You” for its polished and mature sound.

“Long Way Home” is a feel good pop tune that is one of the best tracks on the album, mostly due to the Hemming’s brilliant vocal performance. The chorus is very carefree, and we get an all around bright and sunny tune that is guaranteed to make the groups teenage fans shed a few tears, as fans have teared up with pride at watching their favorite band have enormous success. According to the groups young fans, 5 Seconds of Summer are much deeper lyrically than their One Direction peers, and “Long Way Home” is very much a simple pop track, however to their young fans, the “deepness” of the lyrics is made into a huge deal, though to many adults listening, it doesn’t convey much emotional maturity beyond the teenage world the band is still living in. Hopefully, once the majority of the band reaches their 20’s, they will move out of the bubble of talking about relationships while still keeping fans buckled in for the ride so that they can grow up with the band and their music.

Lastly, the closing track “Amnesia” is by far the strongest track on the record. The only song on the album that wasn’t written by the band (it was originally written by Benji and Joel Madden of Good Charlotte), the song opens with a light acoustic guitar, with Luke and Calum singing about wanting to wake up with amnesia so that they can relive the memories of their ex-girlfriends. While the track is a song that has also made the groups fans highly emotional, the tune is a departure from the rest of the album. It’s light and reflective vibe gets the band away from the trappings of labeling them as a group who can only write catchy pop tunes. Luke’s voice on this track are some of the best vocals he has done throughout the bands short career, as his voice has a gorgeous quality to it that puts other bands in the group’s genre to shame.

While 5 Seconds of Summer are currently gaining steam from their loyal music fans who are a good five to ten years younger than the band members, hopefully they can grow to become a mature rock band that can outlast teenagers and their fickle music taste. Their self titled album gives them a fairly good chance.