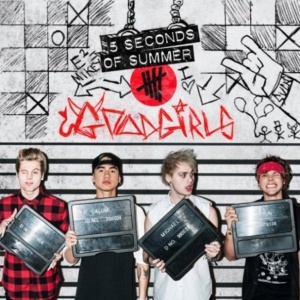 The Good Girls EP by Australian rock band 5 Seconds of Summer is the next EP in a slew of short mini releases the band has put out over the past few years. Earlier this year, the band released their first full length self-titled album which would end up being a hit worldwide with millions of teenage girls. With every single the band has released, they have put out a new EP with at least one new song. Not only is this good marketing for their singles, but it keeps things interesting for the band. The group got their start in 2011 after each member met in school and decided to start a band. Shortly after forming, the band began to put videos of themselves performing covers of various songs on Youtube. This caught the eye of One Direction’s Louis Tomlinson who watched the groups cover of “Teenage Dirtbag” by Wheatus and decided to invite the band to tour with One Direction on their Take Me Home tour in 2012, touring all over Australia. Three years later, the group recently finished up touring for a second time with One Direction on the Where We Are stadium tour.

The Good Girls EP includes the studio version of “Good Girls” that was included on the bands self-titled album. While the song is not as catchy as the bands previous singles, their teenage fans will still have something to scream and sing along to, no matter how bland the song sounds, as it still has the makings of a modest hit. The EP’s second tune “Just Saying” is a brand new track, most likely taken from the songs recorded for 5 Seconds of Summer, and it is a catchy pop punk tune that is reminiscent of many of the bands the members draw inspiration from including All Time Low and Blink 182. The song which talks about what the members won’t do when they take a girl out on a date, still sounds childish but will be a hit with their young fans, as they can still relate to the band as drummer Ashton Irwin is the only member that is out of his teens.

The third tune is an acoustic version of “Long Way Home” which appeared on the group’s album. A catchy number when heard with electric guitars, the acoustic version is a beautiful rendition of the tune, even if the vocals, which are sung by guitarist Luke Hemmings and bassist Calum Hood, do have a hint of auto tune to them. Complete with strings, this version gives the song a more stripped down feel, and going acoustic is something that we want to hear more of from the band in the future. The EP closes with a live version of “Good Girls” at London’s iTunes Festival, and while it is short, the inclusion of the live track will give fans (as well as perspective ones) a good idea of what the band sounds like live, possibly aiding in the decision to go and see the group perform for themselves.

If you’d like to purchase the Good Girls EP you can get it on iTunes, Amazon, Amazon UK, or Amazon Canada.