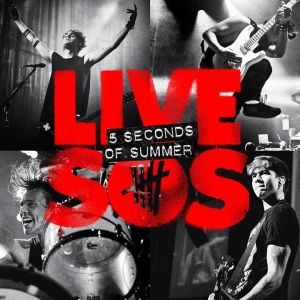 When 5 Seconds of Summer formed in Sydney, Australia in 2011, they set out to be the best band they could be, whether in the studio or on the stage. While they can certainly play on their studio recordings, as they proved on their self-titled debut album released earlier this year, on their new live record LIVESOS they take things up a notch to demonstrate that they are more than a young band with a few hits under their belt. On LIVESOS, they show that they are an authentic rock group that has the chops to put on a good live performance. While the band gained international fame by touring with boy band One Direction, they have very much formed their own identity by sounding more like Green Day and Good Charlotte than the pop stylings we are familiar with in One Direction’s songs. The album was recorded in venues across the world, and on every single song, the band never fails to express that they are having the time of their lives, and despite their young ages of eighteen to twenty, they sound like they have been performing for longer than four years. The record opens with “18”, and as we hear the crowd anxiously waiting, screaming ensues once 5 Seconds of Summer hit the stage. The thing that stands out about the album is that you can picture the entire scene in your head, as 5SOS (as they are lovingly called by their loyal teenage followers) do a fantastic job at putting on an entertaining show.

Next, the band launches into “Disconnected” a tune found on the She Looks So Perfect EP released this past year. Sounding heavily influenced by The 1975, the songs main hook is an addicting one, and the vocals from front man Luke Hemmings and bassist Calum Hood, make this performance a highlight of the group’s live show, as they both know how to captivate a crowd. “Long Way Home”, a rare find in the 5 Seconds of Summer set list, inspires a sing along that would make any band proud, since they know that their fans are not only enjoying the show, but that they will have lasting memories long after the concert ends.

“American Idiot” a Green Day cover, is the first of two covers in the set list, and while the 5 Seconds of Summer studio version sounds subpar to the original, the live rendition is just as biting as when Green Day released the track. And while only drummer Ashton Irwin was alive during Green Day’s 1994 explosion, the group does the Bay Area rock band justice, as they put much energy and passion into the song, putting to rest the criticism that their music isn’t that far off from One Direction’s. LIVESOS ends with the bands biggest hit “She Looks So Perfect”, and as the crowd sings along with the chorus’s catchy long drawn out “heys”, their young fans will surely walk away with an experience they will remember for a long time. While it remains to be seen whether 5 Seconds of Summer will still be around in a few years, at least they have demonstrated that they can play, and play well.