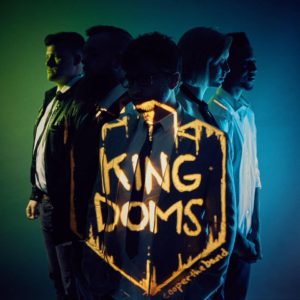 Hailing from Jackson, Tennessee, Coopertheband is about to set the pop world on fire with their new album Kingdoms, an 11-song record that will remind listeners of bands such as American Authors with their anthem like hooks and beautifully done acoustic tracks. Fronted by female vocalist Phoebe Scott, the group sounds ready to take on some of the world’s biggest stages as Kingdoms has a sound that immediately pulls you in.

Opening with the slick pop tune “Rebels,” the tracks anthem like style is sure to land the song on plenty of Spotify playlists, while making plenty of new listeners instant fans.  While the tune has already gotten airplay, this is the track that radio should be adding to their rotation as it has the kind of appeal to make the Tennessee act go straight to number one.

Tracks such as “Collarbones,” show Cooperthebands softer side and Scott’s quiet and serene vocals, demonstrating that she knows how to do more than just front an upcoming pop machine. Everything about the number works, and even though we don’t see it as a potential single, it could be a track that fans urge Coopertheband to perform live.

Tunes such “Kingdoms,” the records title track is another gem. Tastefully done and beautifully performed, there is nothing not to like about this song. One of the most mainstream ready acts to come onto the music scene in years, Coopertheband deserves to make it in every aspect of their goals, leaving the group open to plenty of possibilities.

Listen to “Rebels” below.