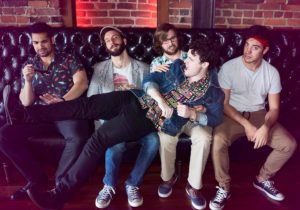 After releasing their self-titled EP, Sir Cadian Rhythm has made a name for themselves within their home state of New York and outside of it. After landing a song in the 2016 film Back in The Day starring Alec Baldwin, the band started to become noticed for their pop and ska infused music. With their new EP Identity Crisis, the group provides a sunny introduction to their music, choosing songs that give their fans a positive outlook, while illustrating their talents in a way that makes listening to Identity Crisis a regular occurrence.

Opening with “Gwen Barkley in the 20th Century,” the group has a vibe similar to The 1975- a British band that incorporates stylistic elements of 80’s music, while adopting a modern sound. With front man Jack Weppler pulling us in with his rich and soothing voice, Sir Cadian Rhythm has the stylings of pop down completely, with a talent for writing tracks that stick around long after they end.

“All Is Fair (In Love and War”) brings a hint of funk into the mix, via bassist Richie Cluxton who performs a slap bass riff that holds the song together, while horn player Matt Carlin keeps things bright and colorful, giving off a sound similar to Florida band Less Than Jake.

Closing out Identity Crisis is “Walk On Wire,” a rock track that includes everything we love about Sir Cadian Rhythm. With a zippy drum part and intricate guitar work, this East Coast act will become your new favorite band as soon as the record is over. Now that the group have made their way into movies, we hope to see much more of them in the near future.

Watch the music video for “Gwen Barkley in the 20th Century” below.