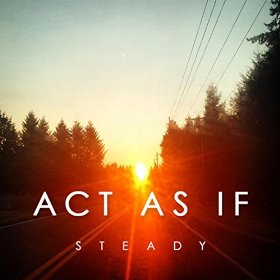 Steady, by Los Angeles indie rock band Act As If, is a great pop record that is beautifully written and irresistibly catchy. While the band has only been around for six years, they have garnered plenty of buzz throughout the music industry, while also getting quite a few television placements, with their songs finding their way on to shows such as Teen Mom, The Buried Life, and Pretty Little Liars. While the band writes engaging tracks, they also have an interesting story. Peter Verdell, the group’s front man, began his career in the music business, not as a musician, but as an A&R rep at Drive Thru Records, a once prominent pop punk label that has been defunct since 2008. Growing tired of his A&R duties, Peter decided to make a career change that same year and began working on his first album titled There’s A Light, released in 2010. While Verdell played all of the instruments on the record, fans were not introduced to a full band until 2011 when the group posted a cover of the Blink 182 track “Pathetic”, which ended up being shared by Blink 182’s bassist Mark Hoppus. After experiencing popularity on a few notable music websites and grabbing more television spots for their songs, the band released their second effort The Iron is Hot in 2012.

Steady opens up with the album’s title track, a slow song which is heavily focused around a piano, and we are immediately pulled into the bands emotional songwriting, while also realizing why the group has become so successful in getting their music featured on television. The emotional delivery of their lyrics and music make a great soundtrack for emotional scenes, as every note is filled with feeling. The only flaw that “Steady” has is its placement on the album. While we are drawn into the track, why the band decided to place the song at the beginning of the record is questionable, only because they have so many other notable tracks that create a warmer feeling, and placing “Steady” at the beginning may paint a depressing picture of the band, as the song’s sound may make the group out to be more somber than they actually are. The next song is “L.A. Kid”, a much more upbeat and punchy track than its predecessor.  The fun pop song is a tight tune that features colorful vocals and bass lines. The tunes feminine touch from member Sara Lindsay gives the song a pretty quality, making the track have a feel that is reminiscent of another Southern California band Best Coast, as the laidback vibe on the song really represents the Southern California feel the group is trying to bring to the forefront. “Let You Go” is another track that mimics the sounds of Best Coast, with its sweeping guitar lines, and golden harmonies that you can’t help but sing along with.

Lastly, the song “Anchored At Sea”, one of the last songs on Steady, begins with a muted guitar riff and Verdell’s soothing voice and Sara quietly singing in the background. While the band certainly has its moments of greatness with their upbeat and breezy tracks, it’s the raw tunes like “Anchored…” where the group really shines. Feeling like you are listening to something straight out of a movie soundtrack, “Anchored At Sea” is a gorgeous tune that really demonstrates the bands playing ability, and by the end of the record, listeners will be thankful that Verdell quit his job, as we get to see another side of his passion for music. Steady is out now.

If you would like to purchase Steady, you can do so on iTunes.