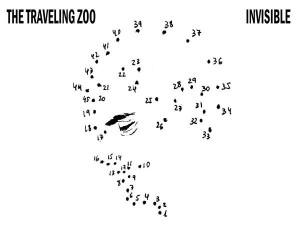 The Traveling Zoo, the solo project from Fran Elias, is a band that is not to be missed. The group just released their new album Invisible, and the 17 track record is a rich and lively release that indie pop fans will adore. The record opens up with “If A Storm Was About To Come”, an indie rock song that sets up the record quite well, as we get a taste of the bands preferred musical direction as well as their creativity and talent for writing songs that are memorable and full of surprises.

“It’s Only Love”, the album’s eighth track, has a slight country feel to it with twangy sounding guitars and a marching drum beat that veers from the bands pop style. The vocals on this track are strong and after only a few listens, it is obvious that Elias has worked and perfected his vocals to create something that is unique while also meshing well for the music his band is playing. “Wonderland” the album’s next cut, is a piano driven ballad that is reminiscent of bands such as Coldplay. Beautifully performed, “Wonderland” is one of the highlights of Invisible, as it allows the bands audience to hear different layers of the group, while also hearing that each song on the record has its own sound.

Invisible closes with “It’s For You” another piano heavy ballad with organs interjected throughout. While “Wonderland” relies solely on a piano and Fran’s voice, Invisible’s last song also includes drums, making the tune sound fuller. While Invisible is a long record, it certainly is worth the time to listen to, as each track has a very individual sound and feel, making the album one that is not to be looked over.