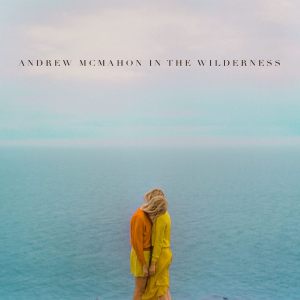 Andrew McMahon in the Wilderness is an album that looks back on old memories, the present, and the future. Andrew McMahon, the front man of southern California bands Something Corporate and Jack’s Mannequin, has come a long way as a musician and songwriter. His new self titled album is the next chapter in his career, and judging from the records overall tone, McMahon is very content with where he is. Andrew began playing music at the age of nine, when he began learning piano, eventually picking up solos before he could read music, learning most of what he heard by ear. When he was in high school, he formed the band Something Corporate, which led him to having hits such as “I Woke Up in a Car” and “If You C Jordan.” A few years after gaining success with Something Corporate, Andrew moved on to Jack’s Mannequin, his very first step into doing something on his own, though a life threatening illness would cause Andrew to stop performing temporarily, as he was diagnosed with leukemia at the age of twenty-two in 2005, only months before the release of Jack Mannequin’s first album Everything in Transit.

Just last year, he released his very first solo effort called The Pop Underground, and a year later he is back at it again, with his new self titled album Andrew McMahon in the Wilderness. Attaching the phrase “in the wilderness” to the project’s name, symbolizes Andrew striking out on his own into the unknown so that he has complete creative freedom. This new effort opens up with a very space like and atmospheric vibe, along with dreamy piano parts and vocal effects that we haven’t heard before, making Andrew’s signature nasally vocal tone sound a little different than what we are used to. The album opens up with “Canyon Moon” a light and airy track that really blankets the listener with its sound. From the opening notes, we knew that McMahon was a great songwriter, but this time around, it feels like we really get a peek into his memories as well as where he wants to go with his music. The song takes us back to his beginnings in southern California, soaking up the sun and the beach, and the synth heavy track is the perfect opener to kick off Andrew’s latest solo effort. “Cecilia and The Satellite” is a song written about his daughter Cecilia who was born last year. Guiding her through life with his “satellite”, “Cecilia…” gives us the first taste of what Andrew thinks of fatherhood, and the easygoing tune tells his daughter exactly what her father has been up to in the years before her birth, giving her something she can draw from when thinking about her father’s music career.

“Black and White Movies” has a rich piano line that is a gentle reminder that McMahon is one of the best pianists around, while still being able to incorporate techno like elements into his tunes without sounding overdone. Andrew’s vocals are also soothing, while being the highlight of the track, as he weaves different sounds together to create something truly memorable.

The album’s closing track “Maps for the Getaway” is an 80’s inspired song that is about everything Andrew and his wife have endured over the years, from illness, to marriage, and finally to parenthood. Maturing and being content is a theme throughout the record and by the time the album is over, we aren’t tired of hearing about Andrew’s past, his present, or his future.  Andrew McMahon in the Wilderness is a very short release, cutting off at thirty-seven minutes with only ten songs, though its content is a beautiful window into Andrew McMahon, and maybe next time we will listen to an album that sounds even more different than the one before it.