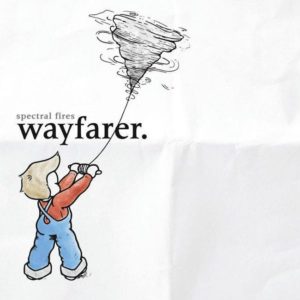 Releasing their new EP Wayfarer this past week, Melbourne, Australia hardcore act Spectral Fires has released a fiery EP that you won’t stop spinning. Forming in 2013 by vocalist Jack Jeffree and two sets of brothers, Harry and Jonah Pratt on guitars, and Lachlan and Daniel Cooper on drums and bass, the band has put out something special with their latest release. Opening with “New Resolve,” Wayfarer begins with a blistering track that punches listeners with bursts of passion and heart, which continuously flows through each song.

“Left Behind,” the EP’s third cut is a punk inspired tune certain to get plenty of mosh pits started. With high intensity and energy, Spectral Fires knows how to effectively approach their audience and grab their attention immediately. With songs that sound similar to United States hardcore act Bane, the groups intensity does not let up over the course of Wayfarer.

“Tethered & Tied” is one track that sounds the most melodic out of all the release’s selections, while retaining its core elements. With excellent guitar work from the Pratt siblings which drives the song, it’s the best number on the record, as each of the brothers and their skillsets emerges fully on this track.

To end Wayfarer “Turnover” is its final tune and its slower tempo doesn’t quite mesh with the rest of the EP, and as Jefree continues his screams, this is the only song that needs work, though listeners won’t be fazed by this however, as the band has given their audience four great tracks that are strong enough to overshadow anything that feels a bit haphazard.

With great musicianship and songwriting, we hope that Spectral Fires continue to release great music that moves hardcore fans with their passion and drive.

Listen to the song “New Resolve” below.