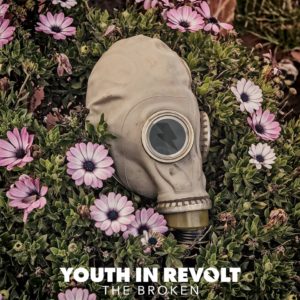 New Jersey post hardcore band Youth in Revolt are an energetic and explosive act, two characteristics that describe their new record The Broken, which consists of 11 addicting tracks that ignite a fire in their fans. Formed in 2012, the group released its first single, a cover of the Kesha song “Die Young,” which eventually led to the release of their debut EP Love Is a Liar’s Game. Following a year long hiatus and a lineup change, The Broken not only reflects the shift within the group’s lineup but also where they want to go with their music.

Opening with the hard-hitting song “Noise,” the group paves their direction early, staying firmly with this sound and style throughout the LP. Tracks such as “Brisbane,” is an acoustic tune that highlights singer Tanner Allen, whose emo tinged vocals add a soft emotion to the track which makes it warm and likeable. Cuts such as “I’m Not Scared” demonstrates the hard hitting and edgy drum chops of Arvin Sarathy, highlighting his impressive rhythm abilities.

Bringing in an electronic touch to Youth in Revolt’s music, songs such as “Alright” features a syrupy autotuned chorus that fits with the pop stylings heard throughout The Broken. Ending with “Only One,” Youth in Revolt know how to get emotions flowing with their music, whether it be through razor sharp and heavy hitting tracks or an acoustic ballad. While testing out different sounds on their new album, nothing feels out of place or awkward for the New Jersey quintet, making fans feel satisfied and content now that they have returned in full force.

Listen to “Noise” below.