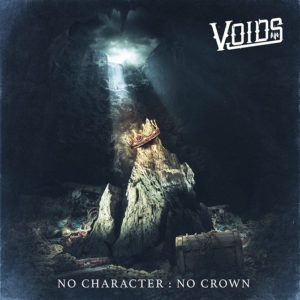 Maryland hardcore band Voids has released their new album No Character: No Crown and for fans of bands such as Wage War, Fit for A King, and Forevermore, Voids not only tries out newer more melodic sounds of hardcore on their new LP, but also sticks with the harder old school style, delighting fans on every end of the hardcore spectrum. Opening with “Dolores,” the group wastes no time launching into their powerful brand of metal music, with Chad Yokel bringing his intense and melodic voice to the group as the band rages through each track as if it was their last time performing.

No Character’s…. fifth track “Invidia” shows off the chops of drummer Zack Bowered as he keeps the groups thunderous rhythm going throughout, and while Voids sounds a bit like they are waiting to explode with songs that don’t let up, the record is a ride that fans won’t want to stop.

“Tracks such as “New Beginnings” is a punchy and heated song, and with Yockel’s low growls throughout, we can’t wait to see where Voids head next in their career, even though the Hagerstown four-piece has only been around for three years. Ending with “Eris,” Voids has made an LP that connects deeply with its listeners as it forces the audience to listen to every song, and as its member play like it’s their last performance of their lives, Voids seems like the next big band to make it in the hardcore scene.

Listen to “Invidia” below.