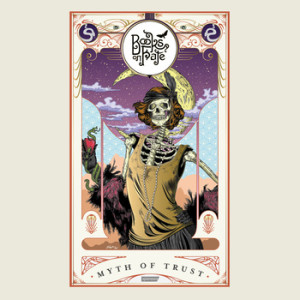 Books on Fate are a band from San Francisco, California that play their own version of melancholy indie rock. Formed as a solo project fronted by guitarist Adam Dishart, who formally played in the band the Catholic Comb, Adam plays music that sounds very similar to The Cure that is tinged with a Smith’s influence. The band’s two song EP called Myth of Trust is music that is written thoughtfully, while conveying the feeling of depression and darkness that Dishart writes about in his lyrics. The first track called “Myth of Trust” is a pop track that has a lot of good elements. Backed by a simple beat, we hear Adam singing along with female vocalists Natalie Rakes and Sierra Frost giving the song a very hollow feeling, and synths also played by Sierra, bringing in what sounds like haunting strings. While Adam’s vocal style seems to be a cross between Morrissey and The Decemberist, it gels well with their musical style since their music falls more on the dreary side.

“Natural Sin Reprise” the EP’s second and final track, still has the same sad feel as “Myth of Trust”, though this time we hear Adam’s acoustic guitar skills, and his delicate and soft guitar picking adds a great backdrop to the songs depressing lyrics which speak of losing not only yourself but someone close to you. On “Natural Sin Reprise” we hear more similarities with The Decemberists, mostly in the vocals, which has a very dry one dimensional tone. While that particular vocal style would be limiting in other genres, with the indie style rock that Dishart is playing, it feels like the lyrics are the main thing that he wants his audience to focus on, as they bring out his emotions. For those music fans would like the above mentioned bands, you will love Books On Fate and their music which is probably inspired somewhat by San Francisco’s dreary weather. For those who are looking for something more uplifting and happy, you may be disappointed with their songs.