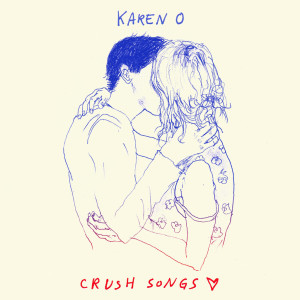 When Karen O’s solo album Crush Songs begins we hear what sounds like a demo recording, instead of someone who has been singing in a well known band The Yeah Yeah Yeahs, for many years. Written in 2006 and 2007 when Karen was twenty-seven years old, she locked herself away to record fifteen songs about having plenty of crushes, but no solid relationships. Instead of hearing something high quality and completely done, it feels like Crush Songs is a mixture of half finished demos that serve no purpose other than to let her fans know what she had been feeling during a particular period. The album itself is a short one, finishing at twenty-five minutes with none of the songs being longer than three minutes. Simply, it feels sloppily done, rushed, and like we are listening to a rough draft that doesn’t impress us.

O was born in South Korea and formed the Yeah Yeah Yeahs in New York City in 2000. The band has released four albums, with their most recent record Mosquito being released in 2013. Crush Songs is the first solo album from O. While it is always interesting to hear a musician embark on a solo career, especially after much success with a band, the punchy sound that the Yeah Yeah Yeahs deliver is completely absent on this record, which may disappoint some fans, unless of course they have enjoyed everything that has a member of the band attached to it.

The album opens with “Oooh”, and right from the get go we hear Karen counting off as if she writing the song and recording it at the same time, while intending to come back to the track later, but never does. The music and lyrics which includes a simple acoustic guitar, is horribly played, almost as if she’s saying, “I’m not about to quit my day job, but I just needed to get my feelings out.” For someone who has much recording experience, Crush Songs could be a very well done record, but it comes across as something a teenage girl would write as they try to navigate the path to adulthood, even though Karen O is an adult herself.

Songs such as “Visits” sound very rough and leaves the listener wanting more, as it begins with a percussion part that distracts the listener from really being able to feel the songs full emotion, while the lyrics barely scratch the surface of her relationships. The only component of the record that stands out some of the time is Karen’s voice, which in certain songs sounds like it could be beautiful; however this is ruined consistently by the low quality recording and her overall lack of care when singing.

By the time the record ends with “Singalong”, we no longer care about Karen O or her damaged and failed relationships. Crush Songs will only be enjoyed by Karen’s diehard fans, and for everyone else we will happily move on.