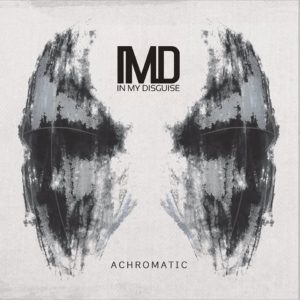 After releasing two debut singles “Alive” and “Fear” last year, British rockers In My Disguise have kicked off 2017 with the release of their debut EP Achromatic, full of five songs that gives their audience a good sense of the band’s sound, while providing hooks and grooves that make their music memorable. Opening with “Alive,” guitarist Lee Alexander and vocalist Ollie Smith show off their incredible musicianship and talent for writing songs that will gain a devoted fan base. Immediately blowing the doors down with a guitar riff that encourages fans to get lost in the music, the groups sense of energy is evident right away.

“Hour Glass,” Achromatic’s second offering is the lead single, and is the EP’s best track. With an opening riff that is perfect for radio play, there is no reason that this song should not be added to playlists on British radio stations. Channeling groups such as Audioslave and Deftones, In My Disguise know how to connect with their audience as pounding drums and incredible harmonies break through and become stuck in your head. “Fear” is a number that takes on a slower time signature, though its heaviness makes up for the dragging feel we experience when comparing it against Achromatic’s other tracks and their punchier tones.

Closing out Achromatic is a bulldozer of a track titled “Scattered Memories.” Once again showing off his mean guitar abilities, Alexander is truly the highlight of the group as he outshines his band mates and really brings out the EP’s heavy style. While the group has self-released this body of work, the band is certainly talented enough to find representation from a record label, which can bring their music to the masses.

Listen to “Alive” below.