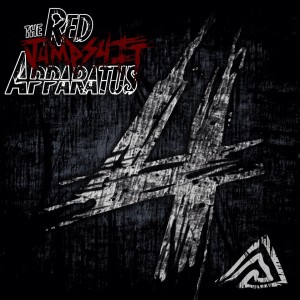 4 is a very nondescript title for a record; however The Red Jumpsuit Apparatus have made it anything but. The record is the bands fourth album, and every moment is packed with dynamite doses of energy. The band got its start in 2003 in Jacksonville, Florida when childhood friends Ronnie Winter (lead vocalist and front man) and former guitarist Duke Kitchens met in an AP Music Theory class in 2001. The band got its name from placing random words on the wall until something stuck, leading them to be called The Red Jumpsuit Apparatus. The band has released three albums including Don’t You Fake It (2006), Lonely Road (2009), and Am I The Enemy in 2011. 4 begins with “Grimm 2.0”, a dark and intense track that begins with a music box sound, leading listeners to believe that the band will start out their record calmly, as well as giving the band a childlike feel, but at thirty seconds in the band launches into a dark and intense sounding tune that doesn’t end for nearly eight and a half minutes. Long tracks such as “Grimm 2.0” always feels ambitious for any band, since musicians can come up with a lot of twist and turns for a song of that scope, and The Red Jumpsuit Apparatus don’t disappoint with “Grimm 2.0.” While the band has a very alternative rock vibe throughout 4, on “Grimm” they are heavily influenced by metalcore music, as vocalist Ronnie Winters intersperses screaming with clean sounding vocals. The songs powerful delivery won’t bore listeners, as the band tries to make every part sound different, keeping things interesting.

The album’s second tune, “California” has a much more poppy feeling to it, completely throwing out the idea that the band is primarily a metalcore band. The band has crafted a bright and vibrant song that will uplift current fans with its polished delivery and will entice new listeners to keep the record spinning. While it might be a bit premature to call Red Jumpsuit Apparatus a great band barely half way through the records second number, anyone listening to 4 will be comfortable labeling the group as such, since it is obvious from the first song that the band has put a lot of hard work and effort into making the best record possible, without sounding like they were trying to force the writing process. “You’re The Mockingjay” is another jarring track that will make current fans happy that the band is back in full force. Holding nothing back on this song, the song mixes vibrant guitar riffs, and razor sharp drums and vocals, making for a very catchy and brilliantly written song. While the band has been labeled as an alternative rock group in the past, it is fair to say that they certainly take influences from some harder sounding bands on 4, and while some listeners might want to label The Red Jumpsuit Apparatus as a metalcore band, the band brings enough pop music into their tunes to be labeled as much more than a hard rock band.
“Not My Style”, 4’s lead single, has a slight punk feel in the drums as you get the feeling that the song might leave the band members feeling a bit breathless after performing it. Due to its slick and fast paced delivery there is no doubt that “Not My Style” will be a fan favorite at live shows, as the songs presents a great atmosphere for fans to sing along to every word.

“Ignorance Is Bliss” begins with blazing riffs, sounding reminiscent of Metallica. As the band kick into high gear with shouts of “hey!” we are once again swept up in the bands relentless energy as the album is one of the most fun records that has been released this year. While fans won’t tire of Ronnie Wilkins screams just yet on “Ignorance”, we get to see his full vocal ability here, and for someone who includes screams throughout his band’s music, his voice is energetic and never wavering on this track, carrying a tune that is highly addictive to listen to.

The records closing track “JIMRS (Star), which is an acronym for “Jesus Is My Rock Star”, is a slow tune that takes a sharp turn for 4’s previous material. While the band has a slight religious angle on 4, while pointing to the bands personal beliefs, it might not necessarily be how the band wants to present their music to the masses. The slow and pretty piano heavy track is deeper than the rest of 4, but it does not ruin the vibe and attitude that the band has had for the majority of the record. The Red Jumpsuit Apparatus is a strong and rollicking band that will hopefully continue their streak of creating great music. There are no flaws on 4, and the songs will remain stuck in your head long after the album is over.