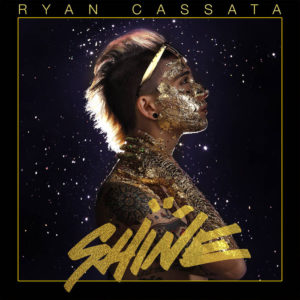 After coming out as transgender in his early teens, New York singer-songwriter and public speaker Ryan Cassata has released his new album Shine, which discusses issues concerning the transgender community. Aside from Cassata’s unique creative angle, the first thing we discover from listening to Shine is how talented Cassata is. Sounding a bit like Christopher Drew Ingle from the Missouri rock band Never Shout Never, Ryan has crafted a record that is full of songs that not only give him the platform to speak for the transgender community, but also to share what is going through his mind, whether its talking about life or issues surrounding his identity.

Opening with “We’re The Cool Kids”, the punk inspired track is a great introduction to Ryan and his music, as the younger generation whom Ryan appeals to, feels like Cassata is speaking directly to them regardless of their gender. While the song’s overall sound and feel doesn’t match what the rest of the record sounds like, it gives the release some variety, making it an enjoyable listen, along with a rougher edge.

“Don’t Count Me Out” is a slow ballad that really demonstrates Ryan’s vocal range, a characteristic that is absent on “Kids.” Giving off the vibe of a singer-songwriter, Cassata proves that he can perform in more than one style without losing his creative identity, and it’s clear that he feels comfortable performing softer tunes, while giving his fans the occasional louder song, probably as a means to provide an outlet for his deeper and angrier emotions.

Ending Shine is an excellent cover of the Counting Crow’s tune “Round Here” a piano soaked ballad that makes Cassata’s talent really hit home, and while his artistry will evolve and change as the years go on, Shine is not a bad debut into the music world, as the LP lets his fans and critics know who he is with no apologies, leaving Shine strong enough to stand up to its critics and knock them down.

Watch the music video for “Bedroom Eyes” below.