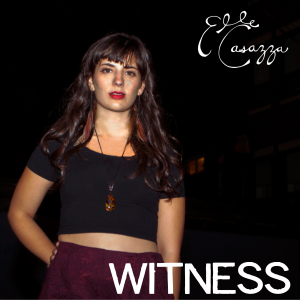 “Witness” by up and coming Chicago musician Elle Casazza, is a rollicking and breezy tune that is an immediate hit. Influenced by a variety of artists including Billie Holiday, Amy Winehouse, and Joni Mitchell, it is obvious from hearing “Witness” that Casazza knows how to write a song while also demonstrating that she can perform. She released her debut EP For Your Pleasure in May of 2013. While “Witness” is beautifully written, the most notable element of the song is Casazza’s voice. Consistently bright and colorful throughout, listeners can feel Elle’s passion for music on “Witness”. While the piano heard throughout the tune provides a rock and roll vibe, it also has a slight jazz sound to it, with bursts of pop shining through to craft a memorable song that will have Chicagoans talking along with music fans who reside outside of the city. Joining some of Chicagoland’s best performers including Honey & the 45s and Elaine Dame, Elle Casazza is in good company as she is sure to make waves in the city and beyond with her vivacious songs.

You can listen to “Witness” below.