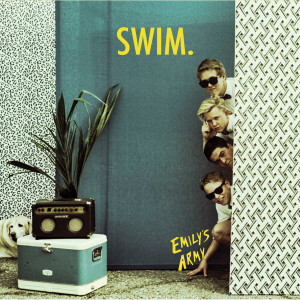 Emily’s Army is a young band from Oakland, California who play a mix of rock and punk that sounds like it comes straight out of the garage. While the band has only been playing together for a few short years, the band has already toured around the United States as well as internationally, as the band has gotten their name out there with little difficulty due to the bands connections with Green Day, as Joey, the band’s drummer is the son of Billie Joe Armstrong, who is Green Day’s guitarist. The group is set to release their latest EP Swim tomorrow, and the band has improved since their first album Don’t Be A Dick was released in 2011, when the band was still in high school. Now the members are in college, and are playing older sounding songs, though they still have room for improvement in their sound and songwriting.

While the four band members have been friends since they were young, they weren’t inspired to start a band until they watched the Jack Black film School of Rock, leading member Cole Becker to pick up a guitar and his brother Max to begin playing bass, while Joey has been drumming since the age of four. The EP also features Travis Neumann on guitar though he has since left the band. In addition to Don’t Be a Dick in 2011, the band also released another record called Lost at 17 in 2013. The bands moniker was inspired by Max and Cole’s cousin Emily who has cystic fibrosis, a genetic disorder that mostly affects the lungs. Through their music, the group has raised awareness of the disease as their name comes from an organization of the same name that is dedicated to the Becker’s cousin. While the group is in their late teens and early twenties, the band has put out four fun songs on Swim that sound reminiscent of Pinhead Gunpowder, another Bay Area band that includes Joey’s father as its front man.

Swim opens up with “Aliens Landing” a track that has an irresistible chorus which you will have difficulty getting out of your head. The songs opens with Cole singing “la la la de da, life’s alright and love is real” which heads into a thrashing mix of punk and rock, and while the song has a chance of coming across as sloppy musicianship to music lovers who aren’t fans of punk, due to its uneven feel, for fans who enjoy the genre they will relish the music, while also getting the feeling that the band is made up of four young kids out to have a good time. The next track “High Wasted Shorts” isn’t quite as lively as “Aliens Landing” though it still gives off the punk vibe that the band wants to express on their EP. They also introduce more of a rock and pop influence on this track, giving the band a chance to show off more of their musical influences, possibly exposing them to a wider audience that may also include older music fans.
“Ammonia and Bleach” is the albums third track, and the fastest tune on Swim. This is the one track that shows the band members ages (19-21), as the song sounds hastily thrown together, like something you would hear an inexperienced high school band play. Due to the bands growing exposure on the national level and beyond, the band could write tighter sounding tunes, while still keeping with the punk rock ethos they want to represent, which could lead them to be taken more seriously. Lastly, “You Bit Me” the closing tune on Swim, doesn’t sound as catchy as previous tracks. The song has a reggae and surf rock bent to it, and while it has a kick back and relax vibe, it doesn’t quite grab our attention as the rest of the EP, since it has more of a bland sound.

Emily’s Army is a band that does a great job at writing good garage rock songs that will inspire many high school bands to form, while punk purists might question the bands standing as a punk act, due to the bands leaning towards pop, though when we are done listening, we find that the main purpose of Swim is pure enjoyment and nothing else.