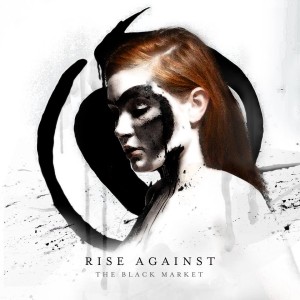 The new album The Black Market by Chicago rock band Rise Against is an album full of heart-felt and intense tunes that will please old fans and delight new ones, as the album still retains enough of their old sound, while also allowing themselves to try new things to keep the music from going stale. Rise Against got their start in Chicago in 1999, first under the name Transistor Revolt after its members quit their former bands 88 Fingers Louie and Baxter. The band consists of vocalist Tim McIllrath, guitarist and vocalist Zach Blair, Joe Principe on bass, and Brandon Barnes on drums. They released one self- titled EP as Transistor Revolt in 2000. In 2001, they changed their name to Rise Against and signed to Fatwreck Chords, while eventually moving to Geffen Records, where the band has released six albums, including The Unraveling (2001), The Sufferer and the Witness (2006), and Endgame in 2011.  As a whole The Black Market still takes us back to the bands punk roots and to where they started, but as the album progresses, we hear a bit of a harder rock edge that begins to stray from the bands punk origins. The album’s opening track “The Great Die-Off” is a punchy song that combines everything fans love about Rise Against-their energy, passion, and great songwriting, which makes for an appealing record that both new and old fans will enjoy immensely. The track opens with an emotional string section, which only leads into an explosive punk sounding song with vocalist Tim McIllrath putting all of his energy into the song, and while his vocals have a gritty edge to it, he doesn’t try to push his range beyond his limits which makes for an enjoyable listen as everything sounds more solidified.

The Black Market’s lead single and second track “I Don’t Want To Be Here”, is heading back to the bands punk days, with a drum beat that charges ahead at lightning speed, while guitarist Zach Blair plays alongside the rest of the band with an energy that can only come from a punk influenced band. Never letting up once, after listening to the world’s introduction to The Black Market, we want to hear more of the record right away, as the tune has a catchiness to it that we can’t get out our heads. “Sudden Life” is a hard rock tune that features a bright guitar riff with a pop inspired feel, making the song a possible choice for another single, as its fiery attitude will inspire many mosh pits at the group’s shows while demonstrating that the band will not abandon their punk roots, keeping themselves as authentic as possible. “Methadone” has a slightly lighter mood to it, while still retaining the rough edges the band has maintained throughout the record. On this track, Zach plays a more pop driven guitar riff, while the rest of the group takes a more mid tempo approach to the tune, letting the song have a chance of appealing to a more casual music crowd.

Lastly, tracks such as “Zero Visibility” have the most different sound out of all the songs on The Black Market. Sounding mostly like a metal song, the band really shows the extent of their skill. Still playing at breakneck speeds with a razor sharp precision, listening to Rise Against makes their audience feel like they can play their instruments effortlessly, while really exploring what they can really do with them. The closing track “Bridges” is another blazing song that sounds really well done musically. The guitar riffs are biting and the drums are pounding, and towards the end of the song Tim brings a raspy quality to his voice (along with vocals from the rest of the band) that makes a great ending to the album, as it goes out with a bang and leaves fans content that they received a fantastic collection of songs.