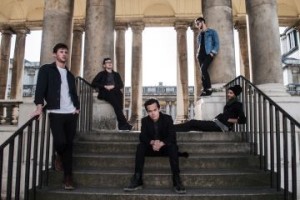 Fades, a British rock band based in London, have released and crafted a catchy six song self- titled EP that is infectious and memorable. Sounding similar to the Arctic Monkey’s, Fades have made sure that the release really expresses the bands style, while also trying their hardest to to write music with as much appeal as possible. Starting off the group in 2014 under the name Metasic, the band released their first EP titled Falling Into Place, which was largely a solo effort by guitarist and front man Joshua Woo. After spending some time on the road building a strong live show and fan base, the band decided to rename themselves Fades, after the Queens of the Stone Age track “In The Fade.”

Armed with a new identity and songs, Fades have come out with a release that not only displays a new image, but also where they are heading with it. The EP’s opening number “Breaking Through The Walls” is a lively track that is vivacious, with a strong musical sense and ability. Performing with relentless energy that gives off the impression that the band doesn’t want to stop, an aspect of the group that we notice immdiately is that they pen tracks that don’t get too hung up on sounding too different or unusual. Playing pop friendly music seems to be the objective of Fades latest work and anyone who listens won’t be complaining about its lack of variety, as the band has an instinctive sense of knowing what sounds good right from the start.

“The Killing Floor” is a groovy track that doesn’t have the same flavor as “Breaking”, though its bluesy guitar line is a snappy reminder that the band haven’t lost its bright flavor. Lastly “Everybody Knows” closes out the record, and its wispy, trancelike sound gives the group a different angle, as we get to see the bands true measure of talent as they can play different styles of music withou sounding to choppy.

Overall, Fades are on the right path to finding their identity under a new moniker, making them a band that everyone should watch and pay attention to.

You can listen to “Breaking Through The Walls” here.